Translated from the Japanese by Stephen Snyder

In Yokō Ogawa’s first major English translation, three stories present a brutally honest and fearless picture of obsession and desire. A cursory glance at the everyday lives of the characters presents the startling possibilities of cruelty and obsession. Through her discerning writing, we begin to question our presumptions about the connections we have and the motivations behind people’s actions. The mysteries of the human psyche lure you into a world of vague arbitrary signs that when deciphered can change your views completely. 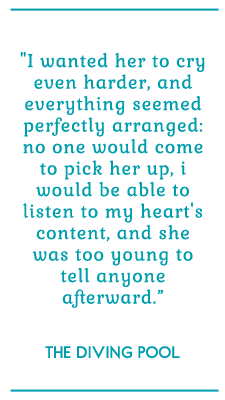 In the title story The Diving Pool, we meet Aya who lives in an orphan house managed by her parents. Since she is the only one who is not an orphan there, she feels detached and alienated. The voice Aya has is a combination of innocence, coming-of-age and brutal cruelty. In an impulsive act, without any kind of motivation or reason whatsoever (at least, that’s what I think), she starts to abuse a baby in the orphanage. The baby’s cries give her pleasure and inspires a satisfaction that seems morbid and downright disturbing. Paired with this sick behavior is her obsession with another orphan Jun. She watches him during diving practice, noting his body and movements with utmost fascination.

The second story Pregnancy Diary is my least favorite but it’s as disturbing as the other stories in the book. The narrator records the progress of her sister’s pregnancy and also describes the various discomforts her sister feels. While the story moves on one can sense the narrator’s desire to create some sort of havoc that will alter the lives of not only her sister but of the baby as well.

Dormitory, the third story, is about a woman who goes back to her old dormitory which is run by an old man who has no arms and only one leg. For me this story had the most potential but the ending left me confused, unsatisfied and disappointed. Despite this, it remains my favorite of the three.

The Diving Pool is a realization that violence and cruelty can exist even in the most quiet way. The characters seem to share a common way of dealing with their negative emotions: real things are left unsaid and never thought of. It’s as if they were afraid of their own words and thoughts. The desire to cause harm to others are merely implied and never said outright as if the characters are aware that we are silently scrutinizing them. I wonder if the isolation shared by the characters warrant an ounce of sympathy from the readers of this book.

What struck me most is the capability of people to hide what they mean under the guise of somewhat innocent acts and language. While the straightforward nature of Yoko Ogawa’s prose drew me in inexplicably, considering the disturbing tones underlining each story, it still strikes me as beguiling that her simplicity of words can unsettle me. She easily exploits our familiarity and views about relationships, carefully leading us into the dark depths of suppressed emotions. She seems determined not to permit her characters to state bluntly what they are planning to do. Yoko Ogawa creates this innate tension that further confirms that there is always a possibility of cruelty and brutality hidden under manners and words.

There’s something tormenting and consuming about unspoken words and hidden motives. As the words and motives of the characters start to make sense in Yokō Ogawa’s The Diving Pool there is a stubborn sense of anticipation that motivates you to turn the pages.

The Diving Pool is an undeniable medley of beauty and darkness, paired with the simple and unrelenting writing of Yoko Ogawa. The conclusions of each story are entirely arbitrary, but the book’s entirety and its honesty will linger in the memory.

This is a participatory post for the following: January In Japan 2014 Readalong and Japanese Literature Challenge 7

8 thoughts on “The Diving Pool by Yoko Ogawa”